Here is my newsletter for May.  The month has been quite full of the ‘stuff of life’ but the watercolours continue.

This month I have returned to working on my Lourens River series.

The 2023 calendar is moving along.  I focussed on Lourens River in Victoria Park, downstream from our town.  The river takes on more sinister nature here.  People sleep under the bank.  It is not a place to be after dark.  Also, the river in Victoria Park is lined with willow trees which convey a somewhat ominous air. For me at least they do.  Even the Wind in the Willows has its darker passages and I recognise why hobbits would be ensnared by Old Man Willow.  So I always feel a bit creepy there.

Here are my Victoria Park paintings so far: 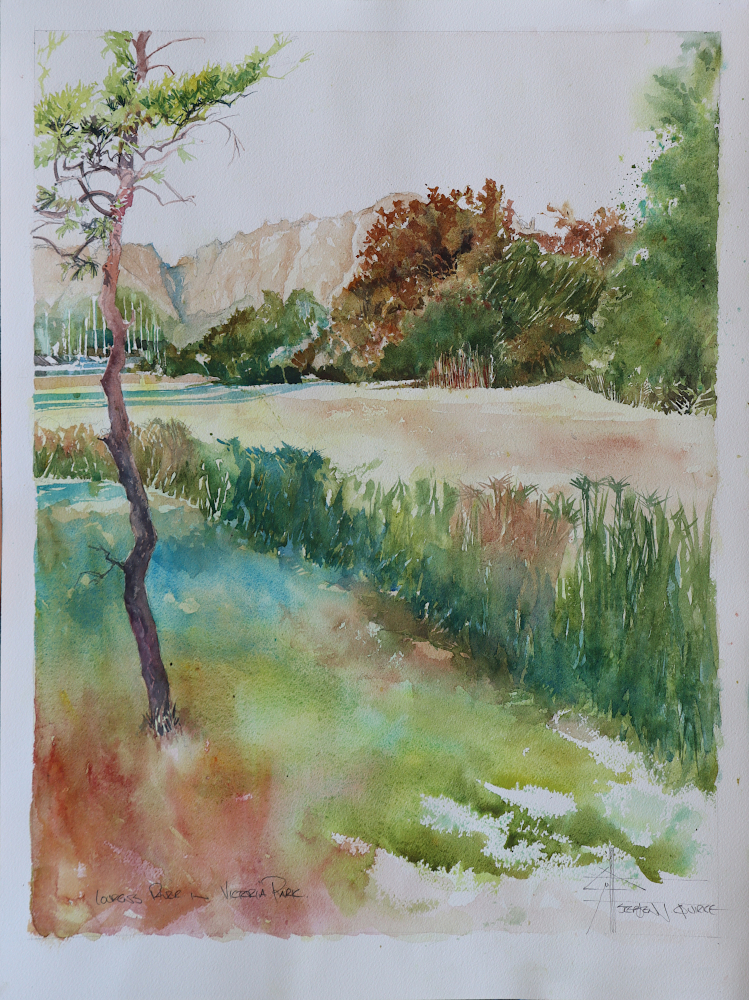 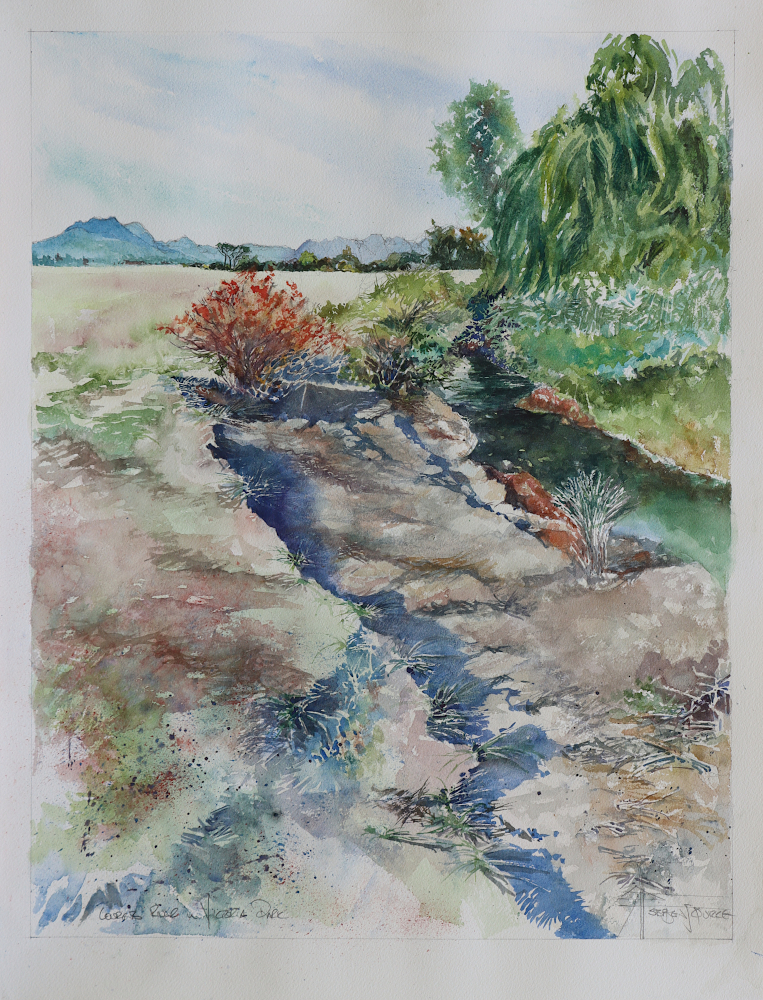 I have also started work on a watercolour of the old bridge over our river.  The first version has been a useful learning experience and I will reserve showing the work till next month.

A trip to the interior

This month I also took a drive up to the Bo-Karoo.  Dick, a friend of mine runs the farm on which he grew up.  “Kalkkraal” is between Strydenburg and Sodium station on the road to Prieska.  If these names lack some familiarity, well, this is the appeal.

A few years ago a tornado tore the roof off the house.  It also lifted a half-filled water tank and dumped it in the veld 2 kms away.  Dick is rebuilding the house in stages.  For those who would like to visit the Karoo he intends to provide a stop-over for travellers. 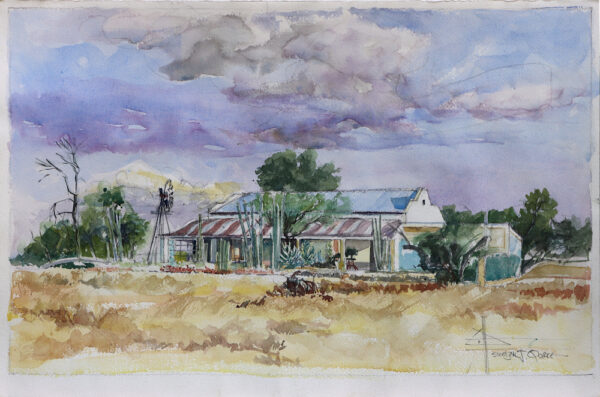 This is the painting I did of his farmhouse.  You can see the new roof and the old.

Near the farm we stopped to look at a group of kudu in a bushy area, a nursery, where the mothers looked after their calves.  All these graceful creatures peering through the bush with their dark eyes and large ears.  It was very beautiful.  We also saw a magnificent kudu bull just briefly, before he launched into the trees and was gone. 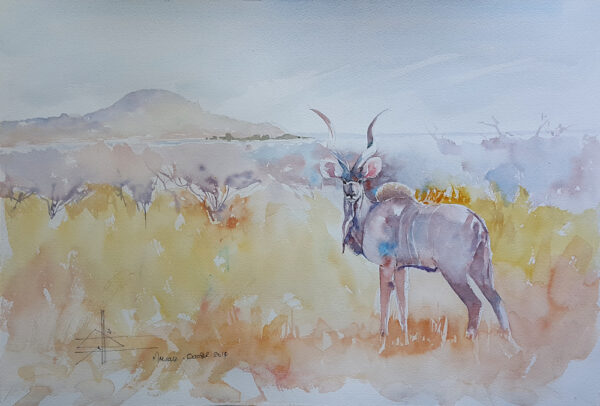 Here is a painting I did from a photo I took of a kudu in Madikwe long ago.  This is definitely a topic for more watercolours in the future.

Running a farm takes a lot of work and caring attention to detail.  Dick told me about how he and his brother would saddle their horses at 03:00 in the morning to ride to a camp across the farm to herd the sheep to be ready to work with them when his father arrived at 06:00.  He also described the different types of bushes and grasses we came across as we walked in the veld.  Each area in the farm he told me, tells him a story I would likely not see.  I found it all quite thought-provoking.

The area is also rich in history. 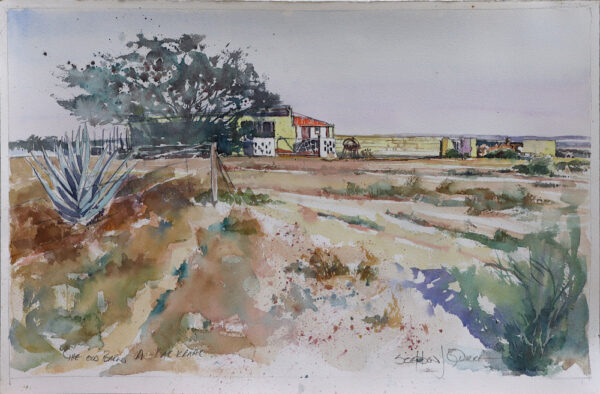 Here is my watercolour of the barn, near the farmhouse.  It used to have a large domed roof which was also lost in the tornado.  The tree next to the building was lying on its side also blown down.

Dick told me a story from the Anglo-Boer war.  He pointed to his barn and said the farmer at the time was standing right there, with his son.  He looked up and saw a man stumbling towards them.  He was barefoot and exhausted.  Looking to the horizon the farmer saw a cloud of dust.

The man was the member of a Boer commando who told him he had escaped from a fire-fight with the British.  His commando had been wiped out and the patrol was after him.  The farmer gave the man shoes and a horse and sent him south towards an area of dongas and thick bush.

This was a highly risky action.  Supporting the Boers was strictly illegal in the Cape Colony.  If the patrol found out they could shoot him.  His son was watching him closely.

When the British patrol arrived they asked if he had seen the man they were chasing.  I think this was a somewhat rhetorical question as they were probably tracking him.  Anyway he replied, “Yes the man was here.  And he took a horse from me.  He headed South”.  He pointed in the direction the man had gone.  “But” he added “I know this man, and I know where he is going.  He is a good shot and he knows this area.  There are many places to ambush you.  I would strongly recommend you not follow him.

And with that the leader of the patrol broke off the chase.

We also saw hints from an earlier history.  There are some outcrops of dolerite on the farm.  On one koppie the Khoisan engraved pictures in the patina on the boulders. 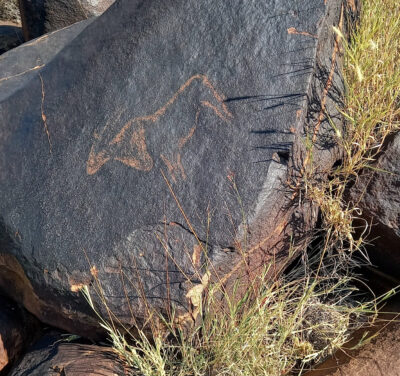 I love this graceful engraving of an eland.  It is crafted so artfully.
Nothing about it says “this is my first go at this”.

My son Ethan and I spent a morning looking at the rock engravings And I sat on a rock did a watercolour: 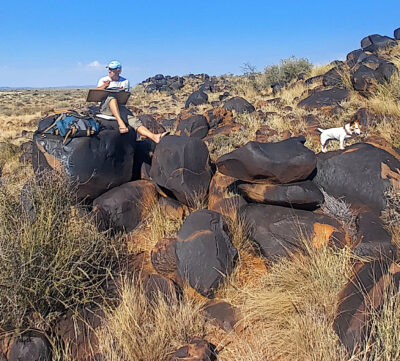 Here I sit.  I am wearing plakkies because the day before, walking in the veld my running shoes were so filled with sharp grass seeds they became quite unwearable.  All the locals only wear veldskoens.  Leather!  The only way.  So we live and learn. 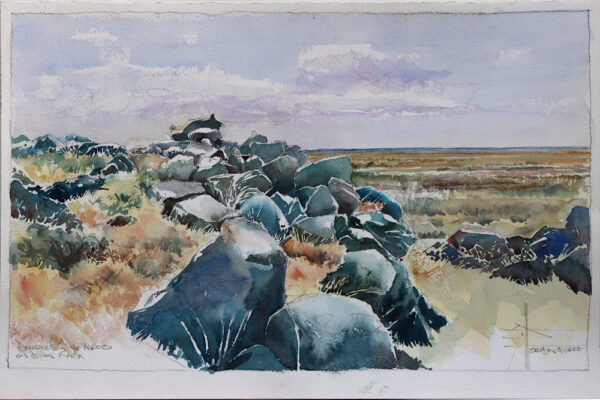 Here is my watercolour in which I aimed to capture the patina on the dolerites:

Work from the past

As usual I want to show work from a while back.  I have just dusted off an old blog posting of my son Ethan doing an Ollie. 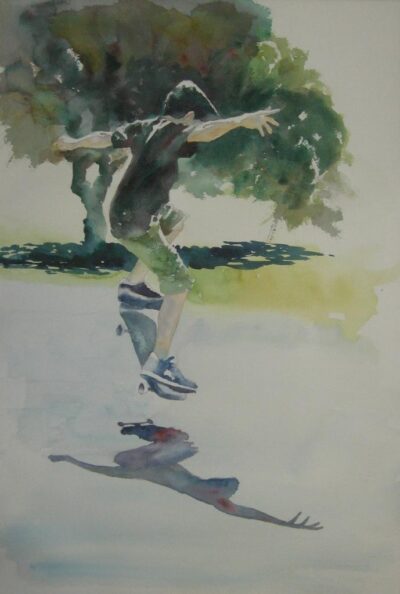 You can see the story and the paintings on my blog here: