In 2009 we went to visit Nona at the Italian Club in Cape Town.  Ethan was very focussed on perfecting his Ollie at the time.  I could hear him clattering outside the studio often.  Sinead took a brilliant photo of Ethan and his shadow, from which I painted this quick sketch: 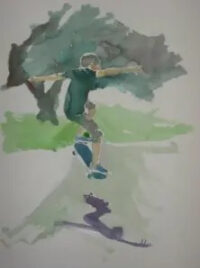 The SJQ Watercolour Newsletter is written to keep you in touch with the watercolour projects coming off the board in my studio.  This is designed to offer you a window in your month.  A breath of fresh air.

If you sign up you will receive a printable poster as a free gift.
Something like the example below 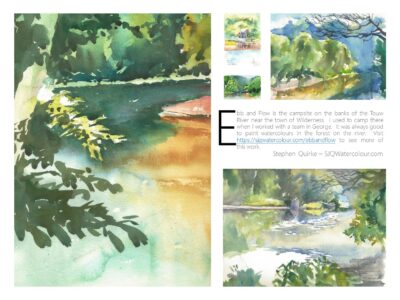 I recognise the trust required for you to share your email address with me.
My intention is paint beautiful watercolours and share them with the world.
If find the idea of sharing subscriber contact information for income quite revolting.

At the time I was working hard to implement the approach taught by Charles Reid.  Here is what I wrote about my approach:  I am so keen to develop a looser approach to watercolours.  Here is a picture of my son Ethan.  I started with a contour drawing and then began with the darks.  I also tried to go out of the body as soon as possible to the dark tree in the background.  I did the road and the green grass last, after the shadow, which was a problem perhaps – but it feels great to just do it with out trying to be perfect – mmm very good.

Then I did a more careful painting of the same scene :  Here is a picture, below, I did of Ethan doing an Ollie on his skateboard: 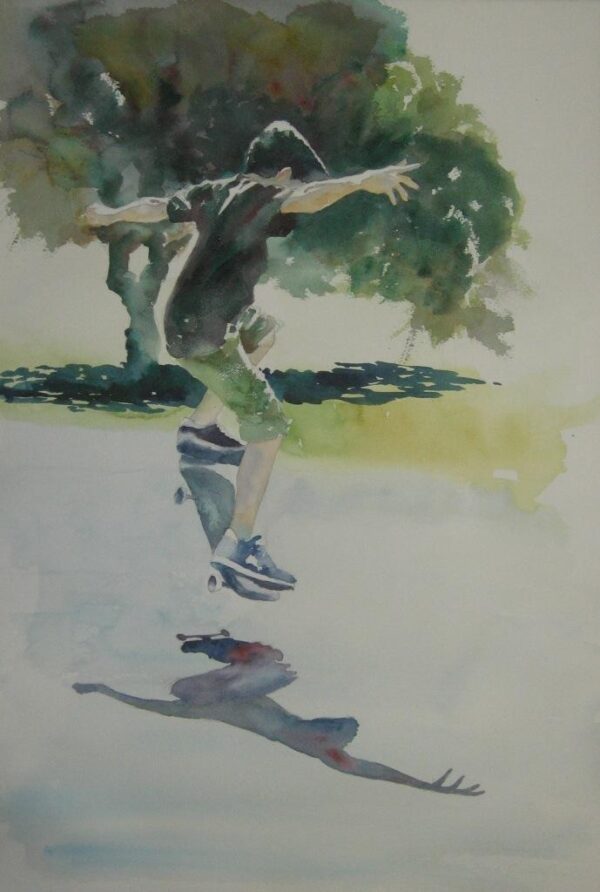 I liked the dark background as it gave definition to his upper body and arms, which were light.  But I found the tree trunk off-putting.

Notes from 2009:  I am pleased with the shadow which has more life, and I like the way the shadow and the tree shadow repeat the motion of the arms.  The tree is overworked though – this is a lot of dark and I want to learn how to apply this amount of colour with sparkle.  This will be my bed-time reading.   Oh yes – Ethan tells me that the move is called an ‘Ollie’ but as his brother Calvin explained, “We are South African – therefore Arlie”  (I am not sure I understood but anyway).

Here are the stages in the development of the first picture:

At the time I wanted to do the painting without the tree in the background.  I had a feeling the painting went downhill from the first one and wanted to preserve some of the freshness.

So I did the picture again: 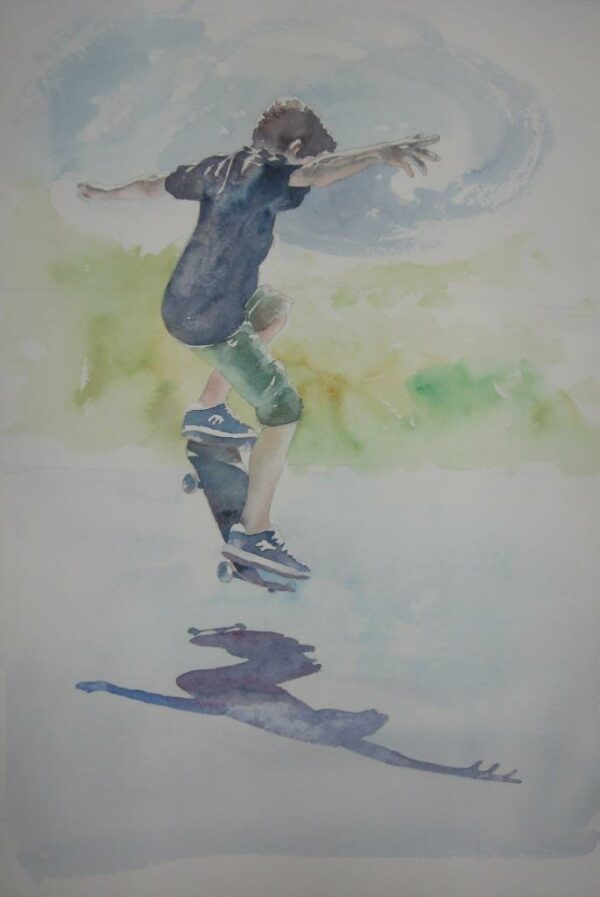 With the lighter background I thought the figure was more prominnent.  However with the benefit of all of these years of other work I prefer the second version.  I have an idea of how I would do it today but that can be for another posting.

What do you think?