My newsletter for April 2022

Well at last the Apple harvest is over.  That was hard work!
OK – I did not pick a single apple but getting the watercolour to work for my client was a mission.  I did the these two versions since the last newsletter:
Here is the one I did of the team: 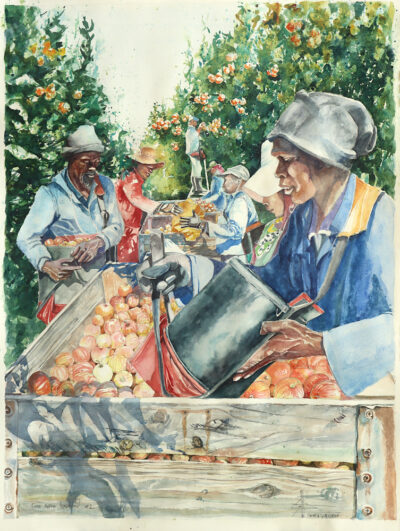 And here is the one I did of the two women sorting apples: 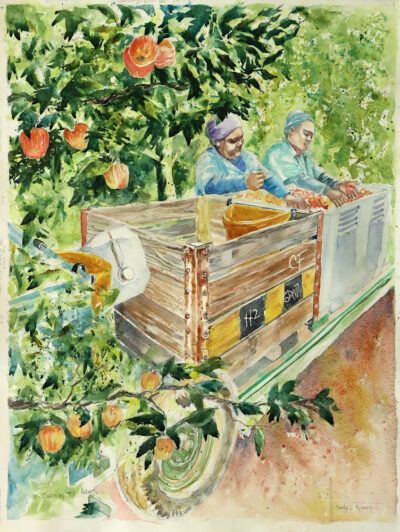 The client was keen to highlight the texture of the wooden bins.  And that was the intention of both of these paintings
I also started work on a third: 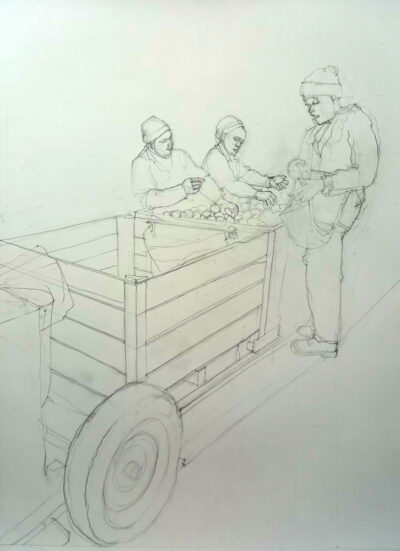 One day I will complete it but for now I have had apples up to “here”.  So to speak.

The design and the drawing takes for ever.  I drew the guy standing there based on bits and pieces from photos, to fit the composition.  Which I think is quite neat.

In the heat of finishing the commission I had a phone-call from a customer who had bought a painting from my website.  My PayFast service had been switched off when I updated my banking details, so she could not pay.  When I checked what she had bought I realised that the size of the painting on the gallery was incorrectly specified so I redid the watercolour at the specified size.

Here is what she ordered:

And here is the redone version which was more or less twice the size. 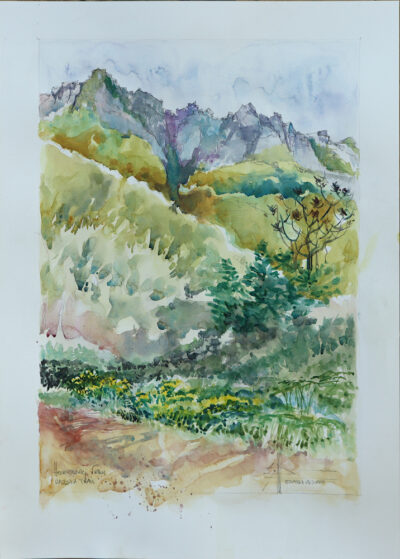 I have also been contracted to create a 2023 calendar for a client.  He wants scenes from around the country.  Here are the first few for the project: 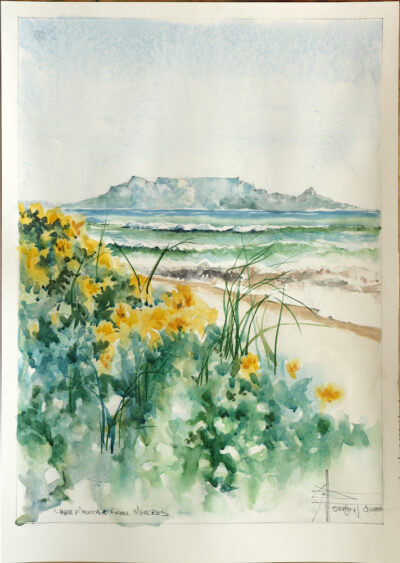 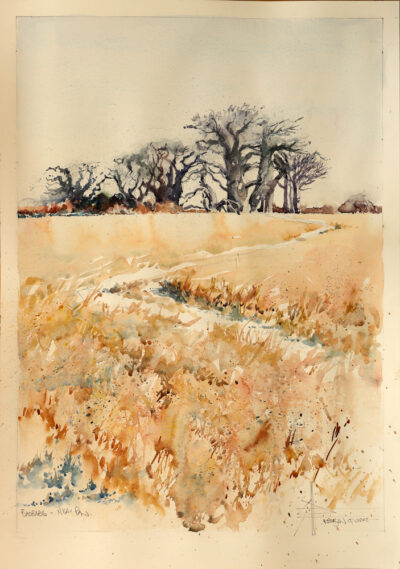 And then last week I got sick.  My PCR test came out positive but as we are finding out these tests show an 85 % chance of false positives.  So who knows.  But I was very ill.  And while I lay there I read two books:

The first was The Gulag Archipelago by Aleksandr Solzhenitsyn.  This is harrowing material.  However I think anyone enjoying the fruits of our freedom should read this at least once.  I got about halfway.

I also read Jordan B Peterson’s new book “Beyond Order – 12 more Rules for Life”.   This is another JBP masterpiece.  In the book he has a rule about making one room in your house as beautiful as possible.  This chapter is a comment on the critical role of beauty in our culture.  It is also a comment on the  as well as just how important it iartist.  I felt so encouraged as I read.  This desire to paint has often been quite confusing to me.  There really are more effective ways to make a living.  Here are some of the gems from the chapter:

I find that so inspiring.

But these are not idle thoughts – He also has a number of videos dedicated to the difficulties associated with art as an endeavour.  And as he puts it in this book:

“… are we helpless prey animals, cowering and protecting ourselves, hiding and camouflaging, or are we Human Beings?”

This is all challenging.  But I keep experiencing this deep desire to paint in watercolour.  Rapids in the river, dunes and bushes on the beach, and  the peaks in our pretty little mountain.   I find it so hard to explain.  I am caught up with the beauty of these little scenes.  It feels good to have the message of support.  Life as an artist can be very lonely.

A page from History

I have just republished a note I wrote about a trip I did in Malawi.
Here is a link to the first post – there are links to the follow-up paintings in the post.

In 2009 my consulting took me to Lilongwe in Malawi where I did an intervention with the US Govt there.  It was a such an interesting event.   After grappling with the issues, preparing and delivering an intervention, I took some time to walk down to the country club in Lilongwe.  Years before, Aura and I had stayed there when we brought mountain-bikes over to Malawi and rode around the country.   At the country club I did the following sketch using my new little Windsor Newton kit with two horse hair ink brushes,  I did a sketch of the cricket pavilion.  Just being there brought back the memories of our trip in the late 80s. 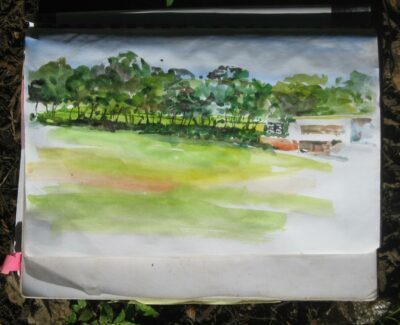 I did not hang around though as it was a long walk back to my hotel and the end of the day brought out a pack of hyena that lived in a central park in the middle of the city.   When the whole intervention was finished I took a drive down to lake.  I spent a night at Cape Maclear where I did this little painting of two little kids playing in the water. 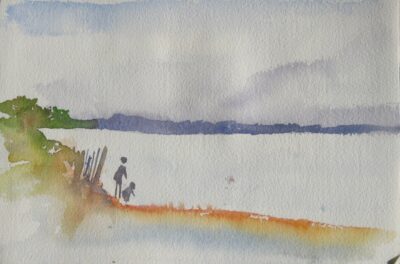 While I was there I took a photo of the workers heading up-river at the end of the day, from which I did this painting on my return to the studio.  This represented a big step-up in skills for me.  Man!  That little boat was packed.  The one chap in the middle was carrying a rifle.  I think it is quite a dangerous place to be on the river. 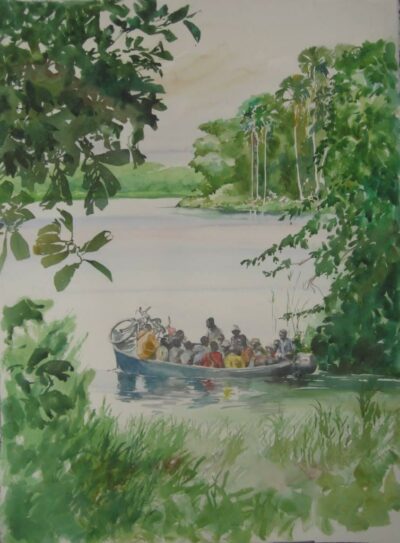 That night I was the only person camping in the campsite and was visited by hyaena and a hippo.  And in the morning –  before catching the ferry back to where I had parked my car I did this painting on the outskirts of the camp site: 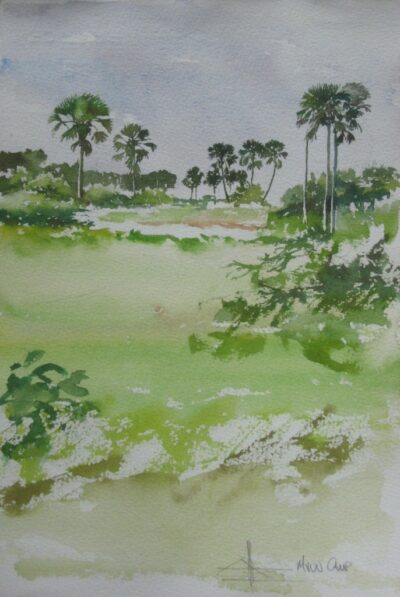