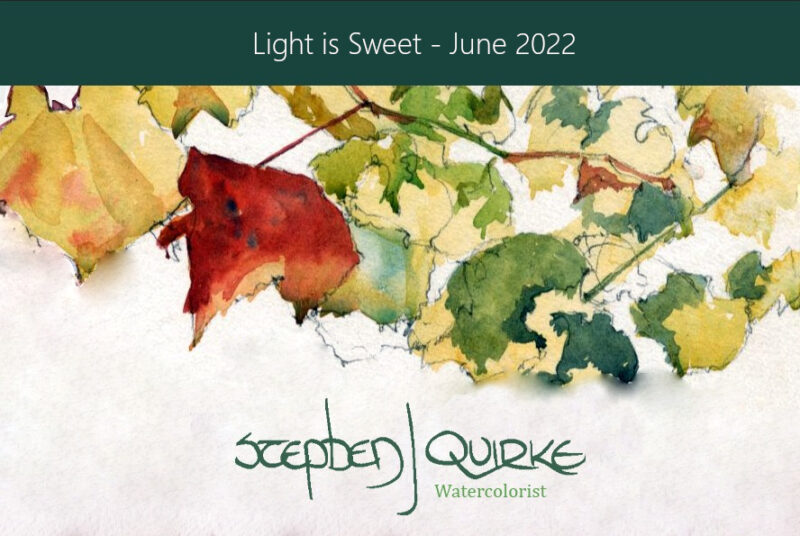 Welcome to this July 2022 edition of Light is Sweet.

“Light is Sweet and it is pleasant for the eyes to see the sun”.  Ecclesiastes 11:6

Whoosh the last six weeks have been full.  With the relaxing of the restrictions on gathering and travel my consulting world has begun to move again.  I have been to Namibia, Botswana and Lesotho and have taken on a load of documentation.  I tried to get this newsletter out but the consulting work has been all-absorbing.  But the call to watercolour just intensifies with neglect.  And with the August drawing to a close I have a calendar to complete.  But God is good and there are many hours in a day if we can use them well,  So – let me get this edition of “Light is Sweet” out

July was a strange month.  I took a hike into the mountains to get material for the calendar and then took a trip to Windhoek on a consulting trip – and was reminded of a story from long ago.  And my revitalised post also has a strong taste of Namibia .

All of this in the newsletter.

But as you open this note – join me on a short guided daydream.

Pause…
Put down what you are doing
The newsletter takes about 4 or 5 minutes to read.

Sit back.
Close your eyes.
And take a deep, breath.

The Calendar paintings took on a new energy in the month.  I have been trying to get hold of the farm management in the farm at the top of the river – with no success.  So I took a hike up over the mountain from Jonkershoek with my good friend George.

It was quite a long day for unfit me.  But it was good company and the views from the Swartboskloof hike are breathtaking. 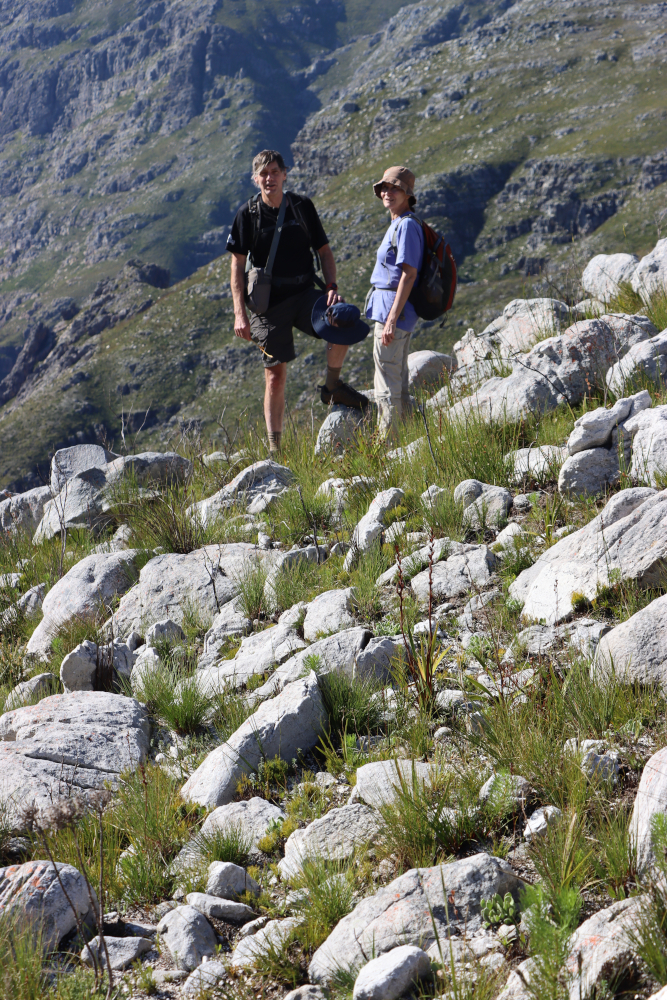 I was also given a contact on Hathersage Farm.  A beautiful stretch of land in the heart of our town.  The Lourens River flows. Through this last area of calm before going under the bridges on Main Road.

There were some wonderful views of the farm and the mountains.  I would love to spend time there soon.  And there is a small rapid passing around a large pine tree.  Here is the first version of what I have called “Pine Tree Rapid”. 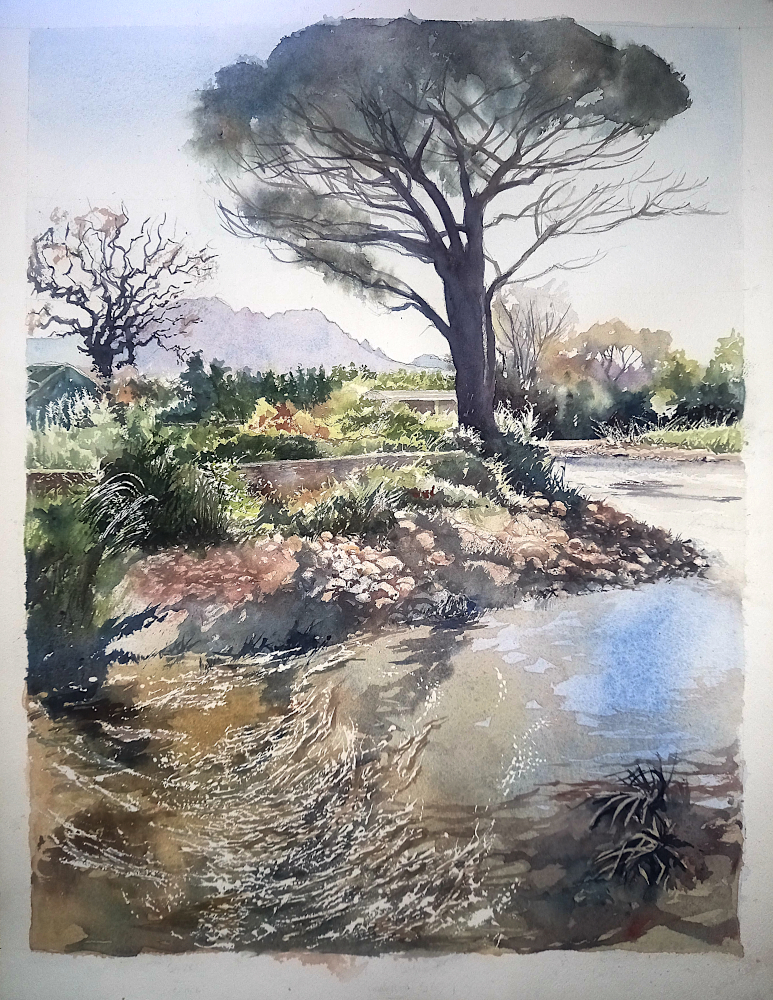 I was also asked to do a watercolour of the watsonias on the Watsonia Trail in the Helderberg Reserve.  And this is how it looks right now: 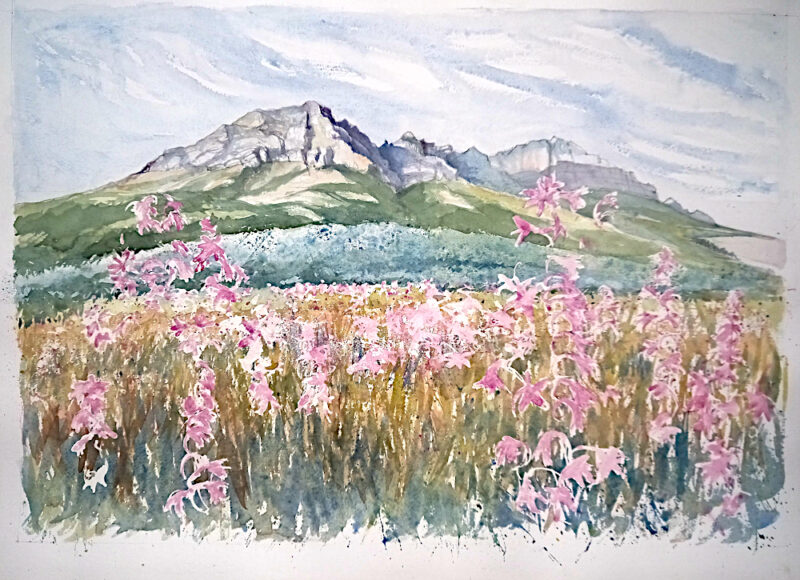 A trip to Namibia and down a little lane in memory

During the month I facilitated a workshop for an organisation in Windhoek.  The venue for the workshop was a few blocks down the road from the hotel in which I stayed and so I walked down through the city for each session.  On the way I passed an arcade and saw a coffee shop that triggered a chain of memories.

Here is the core story doing my best to avoid rabbit holes:

Long ago, in the year before I began my studies I worked for a sea fisheries research organisation in Walvis Bay.  In the evenings I also worked in a steakhouse in Swakopmund called “The Desert Inn”.  I used to catch a lift through from Walvis to Swakop, swim for an hour and then walk over to the Desert Inn.  Later in the evening I stop in to chat with my friends in the bars around town.  I didn’t drink then – or now really.  It was cool just to see who was around.  Later I would retire to the Swakop Lighthouse where I had a met a friend who was a lighthouse keeper (how do you become a lighthouse keeper?).  In the morning I would meet a friend who would give me a lift back to Walvis.  It was a strange time.  Definitely a chapter in the book I will probably never write.

In those days the Swakop Salt Company supplied the whole of Southern Africa.  And whenever I saw a salt- shaker from the company I would point out the room in which I used to stay with my mate Owen. At least I surfed the couch there till he met a formidable German girl called Latitia.  I returned from my night at Desert Inn to find my tog-bag on the grass outside the lighthouse.  Fortunately I the owner of the steakhouse had a bed in a spare room which I used for a short time.   Then I found a place on the beach… – no – focus man…

I got to know two sisters from Windhoek who would sometimes drop in to chat at The Desert Inn.  Naturally I said I would come up to visit them in Windhoek.  And I did.  One Saturday morning I took my pack and walked out to the Windhoek road and stuck out a thumb.  This was not so crazy.  I had friends who would drive the 390 kms to see a movie in Windhoek – then back after the movie.  ‘Long distance’ meant something different in a country so vast.   Though  I also knew quite a few people who had hit kudu on the road.  What can I say?  Dit is leeu-wereld ne.

A farmer from the Kalahari picked me up.  As I sat next to my pack on the back seat he passed me a six pack of beer bottles.  Taking the key out of the ignition (which was also normal then) he showed me how to take off a cap with the key.  This was long before twist-off tops.

Within minutes he had finished his beer and requested another.  I remember shredding my fingers trying to get the tops off those stupid bottles.  We stopped in Usakos to buy more beer.  30kms later we stopped in Karibib.  His wife waited in the car while he marched me into a bar.  He quickly knocked back two beers while I struggled to get through half of mine (did I mention that I didn’t drink?).  When we left the bar he bought another six pack.  I kept him supplied with blood stained bottles of beer and worked my way through the one he handed to me.

And so it was that 200km later he pulled over on the mainroad in Windhoek and I stumbled out of his car.  My head was pounding and my hands looked like I had stuck them in a blender (which had not been invented then – I don’t think).  I staggered down the pavement until I saw a coffee sign.  Entering a rather dusty arcade, I found the place, plonked down at a table and ordered a coffee.  And another.

Many coffees later I called my friends the sisters from a ticky-box (heh heh).

My friend the beer-drinking farmer had also smoked all the way up to Windhoek.  So I must have smelled like a bar-rag.  Anyway I had a bath at the sisters’ house (even though I could not figure out how to put in a plug).  I was not welcomed with open arms by the parents so we moved on to friends of theirs.  This was a local doctor whose son I was to get to know during my studies in Cape Town.  I remember going to movie, meeting the girl who lived in a castle and sleeping in the local military base.  The trip back to Swakop was probably uneventful as I don’t remember anything about it.  So that was that.

OK and here is the point:
The coffee shop is now called Zenzi’s and is a popular place in Windhoek.  Here is my sketch of Zenzi’s: 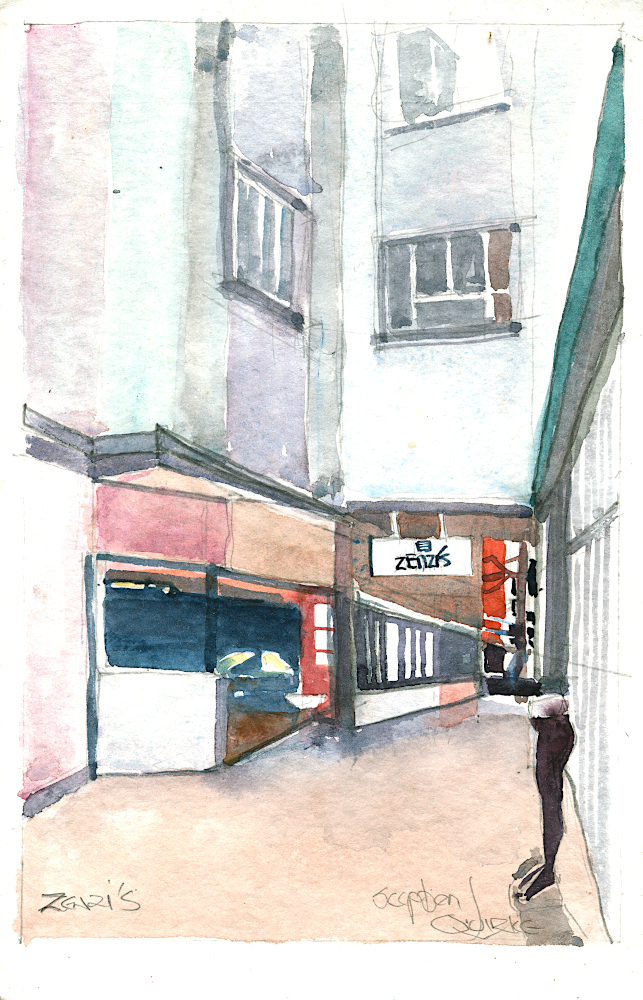 I started writing “Light is Sweet” to keep in touch with everyone interested in my watercolours.

When you have finished reading.
If you have felt an urge to respond to what you have read
please go to the online version and drop a comment.

The calendar project for 2023 is coming together.  The Lourens River paintings are almost complete.  Though, as the one old guy said to other in Lord of the Rings “The hour grows late…”  The intention of these newsletters is to market this part of my offer as a watercolourist.  Therefore…  If you are interested in the opportunity to support the Lourens River Conservation Society, to take a sponsorship slot in the calendar, or to pre-order calendars, please drop me a note.

This month I revitalised a post about an exhibition I held long ago.  I had worked every weekend for a year, sitting up at my kitchen table after the family had gone to bed.  I regularly sat up till 03:00 or 04:00.  Some mornings I would realised I couldn’t see what I was doing anymore.  You can read the story at this posting on my blog.

Unfortunately I did not take decent photos of my work.  However I repainted one of the works which I sold at a later exhibition.  This is a particular view of Grosse Spitskop in Namibia: 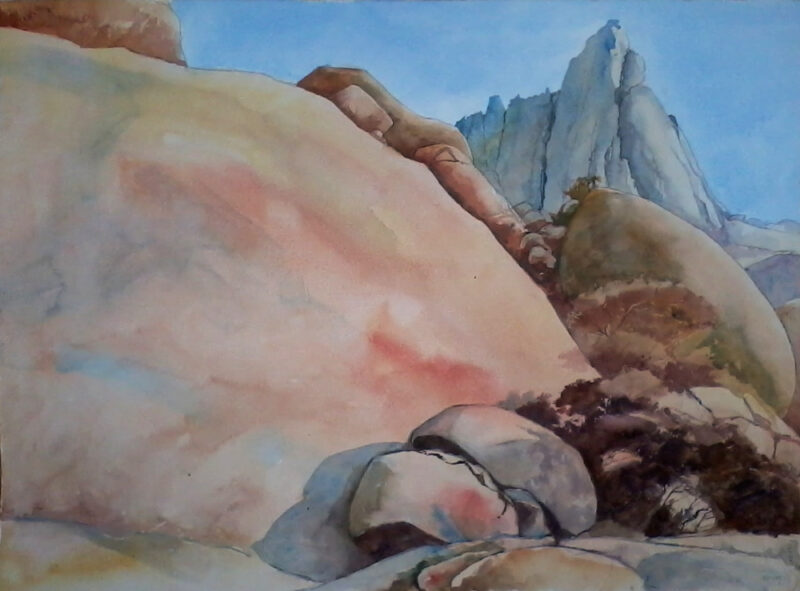 And here is another watercolour I repainted.  This is a view a valley in the heart of the Brandberg massif.  Perhaps it was the towering faces of granite.  I know it does not make sense but the word I want to use is ‘soar’ Soaring slopes.  Perhaps it was that dry tree.  But I always felt a special awe here.  And I feel a pull to return. 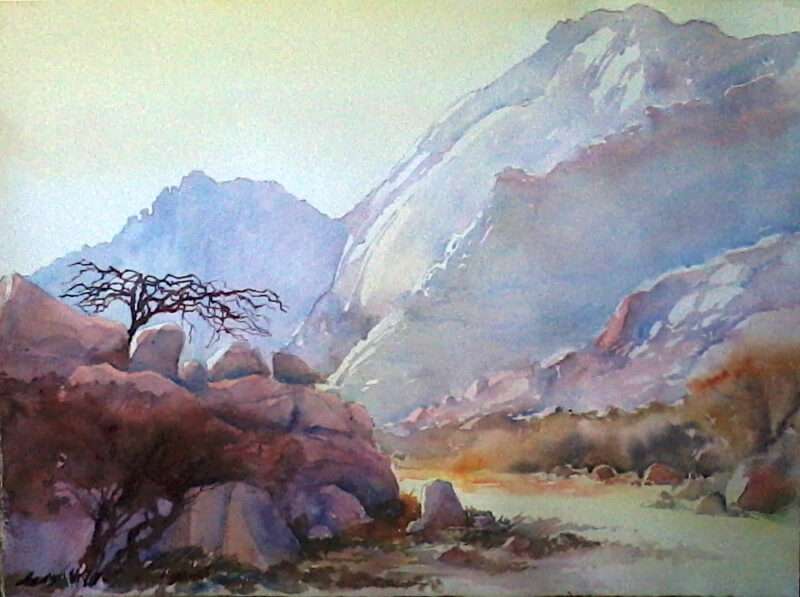 And that my friends is the news – well kind of “olds” by now – from the SJQ Watercolour studio.  And it is almost time for me to be late to publish my August news.
Bonus!  Bonuses all round.