Animus et Anima was the name of my first ever watercolour exhibition.

In September 1998 I trekked up to Namibia with my family.  This was going to be a family holiday with a difference.  I had sent almost 80 paintings up to a gallery in Swakopmund to have my first ever exhibition.  A year before I had changed jobs, from a frustrating comfort zone in the oil industry to a challenging position in one of the large financial services companies.  I remember my heart sinking the first time I looked across acres of open-plan hokkies with people buzzing around like bees on a honey-comb.  The change was largely brought on by a journal I had begun.  I was working through Julia Cameron’s book “The Artists Way”.  Every morning I would get to work early and write my three pages, sitting in the parking lot.

Back in my previous company I would take my paintings and pin them up in my hokkie just to look at.

One day someone called John pinned this note next to my painting: 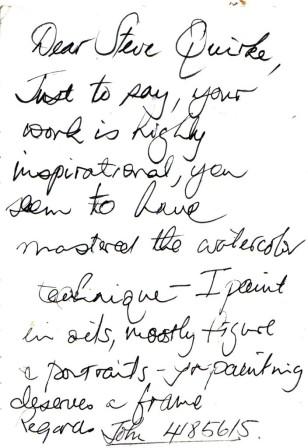 So I started thinking about an exhibition.  Every morning as I sat in the parking lot writing my morning pages, I would write at the top of page 1:  “So what are you doing about your exhibition”.  Just that!

And I started working.  Most Friday and Saturday nights I would set up my watercolours on the kitchen table at about 21:00 when my family were going to bed.  I would paint, often till 03:00 or 04:00.  Usually I would realise I was too tired to see what I was doing anymore.  And I produced some great work.  In the week I would put my paintings up in hok and dream about painting while I dealt with the business of Software Quality Management.  And in the middle of the year I contacted Sharon at Hobby Horse (I had a link to Hobby Horse – but it has now changed hands – and name).  Sharon had been so gentle and supportive with the first pictures I brought to the gallery when I lived in Swakop and had sold some of my work.  I had said that if I ever held an exhibition I would contact her first.  She and her husband, Don were keen so we started organising – through fax (yep fax!)  I sent my all of my work up to Windhoek with someone who was flying up for business.  Don organised to pick up the work and got busy with framing.

My friend Melanie helped me design the invitation and wrote the paragraph about the artist.  I organised with friend Roy the printer to print the invitations.  And that was a mission.  Eventually they had a mistake in the address.  But anyway.  I was doing it. 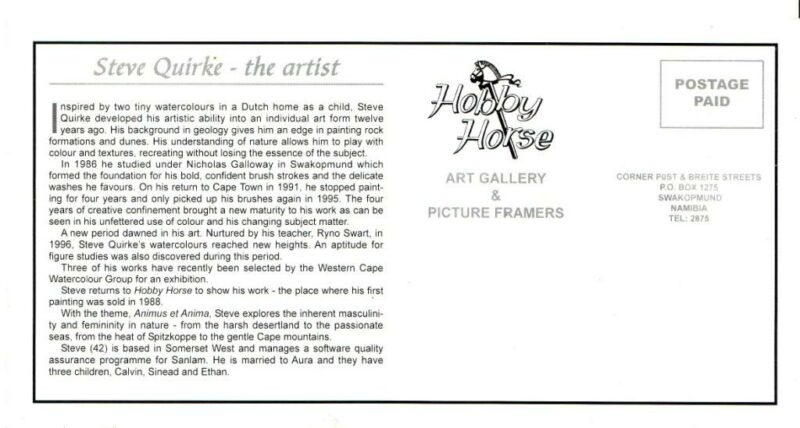 I had a wonderful day working with Sharon and Don to put up my pictures in the gallery.  He teased me about my write up on the invitation which admittedly was a rather grand.

It was so exciting.  And that night I presented my work to the town.  Or at least those who were there.

Animus and anima refer to the male and female sides of our psyche.  It seemed to describe the desert in Namib desert and the lush green of Cape Town.  So this was not a major thesis in psychology.  My two main pictures were of a boy, my son Calvin,  lying on the Brandberg – at the top of Amies Gorge, looking across this vast plain to Table Mountain in the distance – Anima.  The other painting was of a little girl peeping out from behind a stone-pine, from the slopes of Table Mountain.  She is looking across a vast plain to Spitskop in the distance.  Spitskop and Brandberg are both granite plugs that rise majestically out of the desert plain.  mmmm as I write I feel the tug.  We had some great camping trips out there.  I remember lying next to a little fire on top of Brandberg with leopard, who had followed us all day, grunting just off in the dark.  My daughter put on a tutu and posed for the Anima picture.  I put a line drawing of the paintings on the invitation. 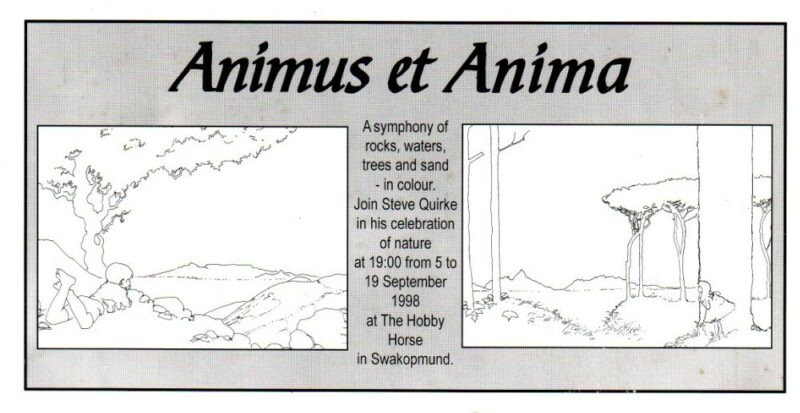 Here are the Animus and Anima paintings.  They really are not about the psychological concepts (or are they?).  The overall feeling was that when I lived in Swakopmund I felt a yearning for the green forests and mountains of the Cape.  Sunday afternoon walks around the salt-works at Mile Four sometimes felt quite depressing for me.   There is that interview question “what would you tell your 30 year old self” – sometimes I wonder what would have transpired if I had left the IT department on the mine and developed my skill and career as a watercolourist.  I don’t know though – life is too rich a tapestry to figure out how “what could have been” would have worked out.

Well eventually I left the mine to work in Cape Town and Aura my wife joined me a few months later.  And then I felt a yearning for the desert.  So the two paintings are:

Animus – there is my son Calvin lying under a ‘witgatboom (Shepherds Bush) at the top of Amis Ravine in the Brandberg – looking over a vast plain to Table Mountain in the distance.  Calvin posed for me in his cycling gear.

Anima – this is a watercolour of Sinead my daughter looking from behind one of the Stone-pines on Table Mountain lower slopes.  She is looking across a vast plain to Grosse Spitskop in the distance.  (Spitskop is just a more characteristic form than The Brandberg).  Sinead put on her fairy dress and posed at the rock I had just placed for the wall I was building in my back yard.  So there are my yearnings presented by my two children at the time.  Ethan had not joined us at the time I was designing these paintings. 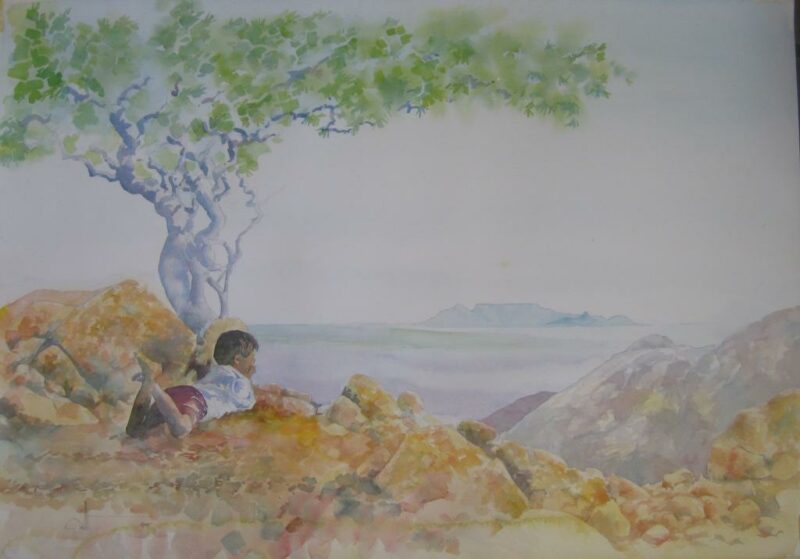 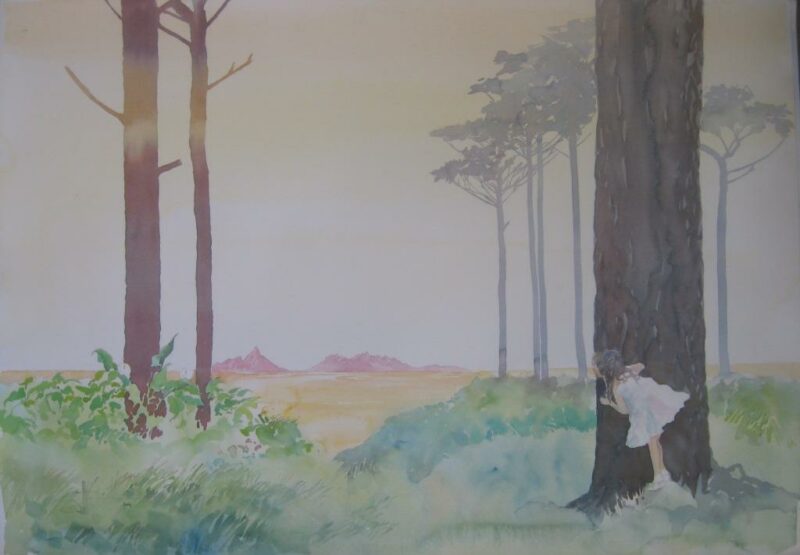 We had a few days in Swakopmund before the exhibition so we took a drive up the coast to Cape Cross to smell the seal colony there.  We then headed inland past Brandberg West, where there used to be a copper mine.  We drove past the western slopes of the Brandberg to Uis.  The community in Uis had converted the old mine club into a motel where we booked in for the night.  I got up early the next morning and drove back to the Brandberg where I sat on a kopjie just off the road and painted two pictures.  The first was sold in the exhibition but I kept this one. 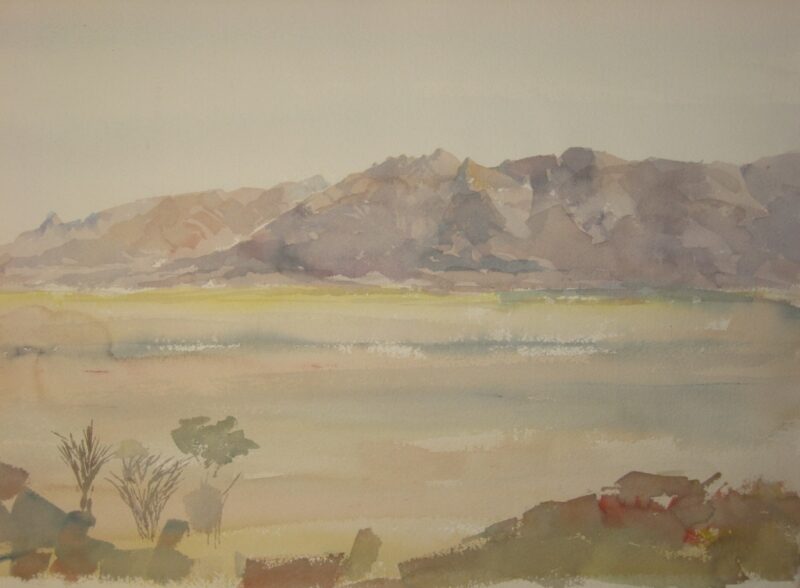 This is still one of my favourite watercolours.  I am glad I still have it.   The trees in the foreground are Brandberg Acacias which only grow in that area, apparently, at least that is what my friend Buzzy told me.

It would have been great to show some of the work I had on exhibition.  I really pushed my skills quite far in that year.  I took pictures with my camera, as I set up the exhibition, but they were such poor quality that it is not worth putting them here.  I had read about taking a quality record of your work from one of my favourite authors, Alex Powers.  I kind of thought this was for “real artists” and left it at that.  🤷🏻‍♂️ – so – more water under the bridge.

The morning was quiet as I sat and painted.  Not a sound.  Every now and again the karoo-toads in the valley would chorus – kwa kwor kwa kwor kwa kwor they would call.  Then they would fall silent.   Later as I sat on the slope I heard a droning.  Looking up I saw a cloud of dust on the road on which I driven.  Over the next 10 minutes the sound grew and faded and grew.  Then this old old landrover bakkie came clanking past on the road below.   Then the sound slowly faded in the growing heat haze.  Then all was quiet.  I finished this painting then packed up my stuff and returned to Uis.  It felt like my whole life had turned a corner.  Some kind of hair-pin bend.

I have not been back since.