I have just spent a couple of days in the Cedarberg Mountains about 300 km north of Cape Town.  I arrived after dark because I had to take a detour around the Olifants River Bridge which was flooded. 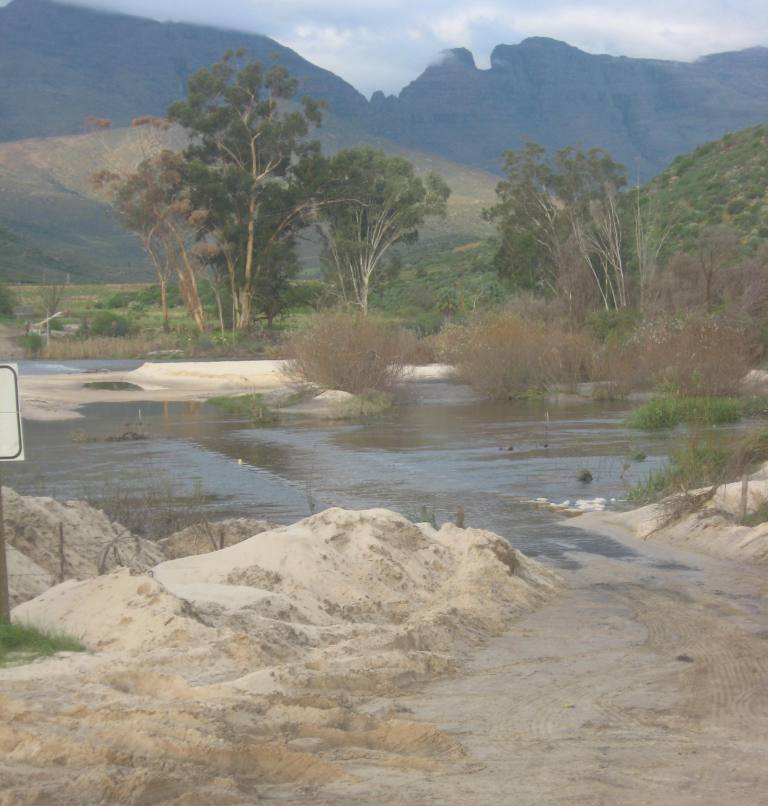 I had in mind to walk up the Welbedacht Kloof in the night and overnight on the shale band or at Welbedacht Cave.  However I could hear the river flowing from where I parked and was not keen to wade through in the dark.  So I took out my tent where I parked.

My kids had borrowed the tent and there were no tent poles so I lay under the stars and covered myself with the flysheet.   At about 01:00 I was woken up by a leopard sawing nearby.  Later a friend told me she had been at The Driehoek farm that night when they had released a trapped leopard.  Just as well I had not been hiking up the kloof maybe.  I lay and looked at a cloud across the mountain in the moonlight and wondered if weather was coming in.

At first light I realised the cloud was a snow field on the mountain.

I got up just after sunrise to paint this watercolour of the mountains at the end of the valley.  This is how it looked: 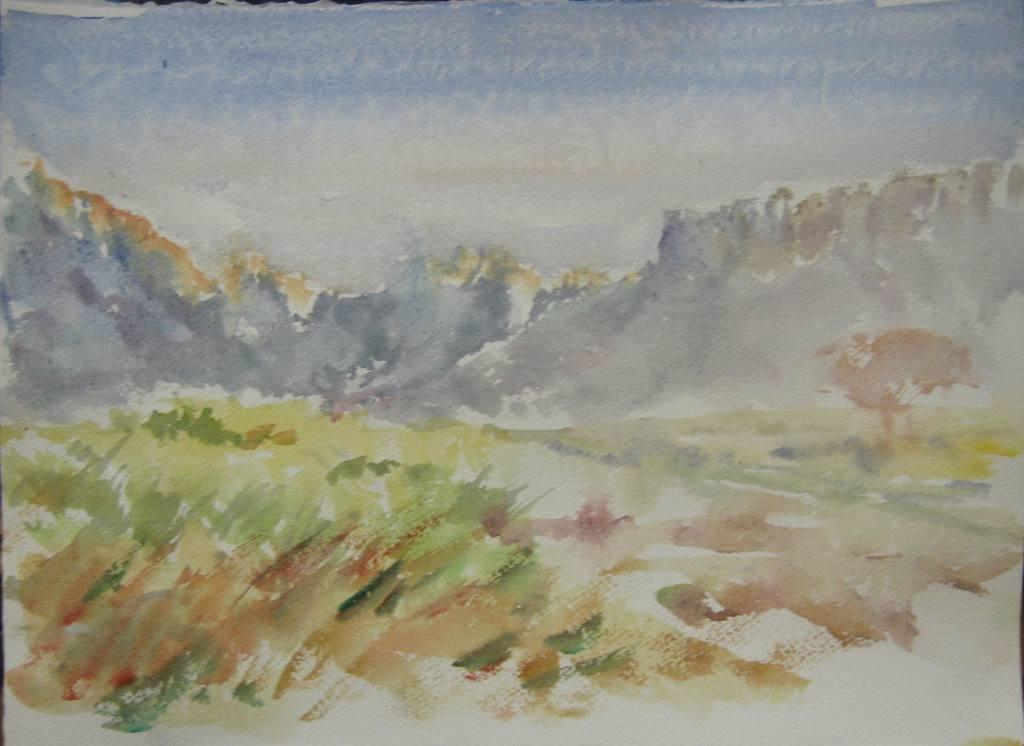 The patterns in the sky were caused by ice-crystals forming on the page as I completed the wash which I think is quite fun.  For a few seconds it really was a smooth wash.  It was very cold there.  The colours were freezing in my palette and making this mushy icy stuff.  Till the sun came up and melted the ice which made the colours run.  All things I had not thought about.

Here is how it looked before I put in the last strokes in the foreground: 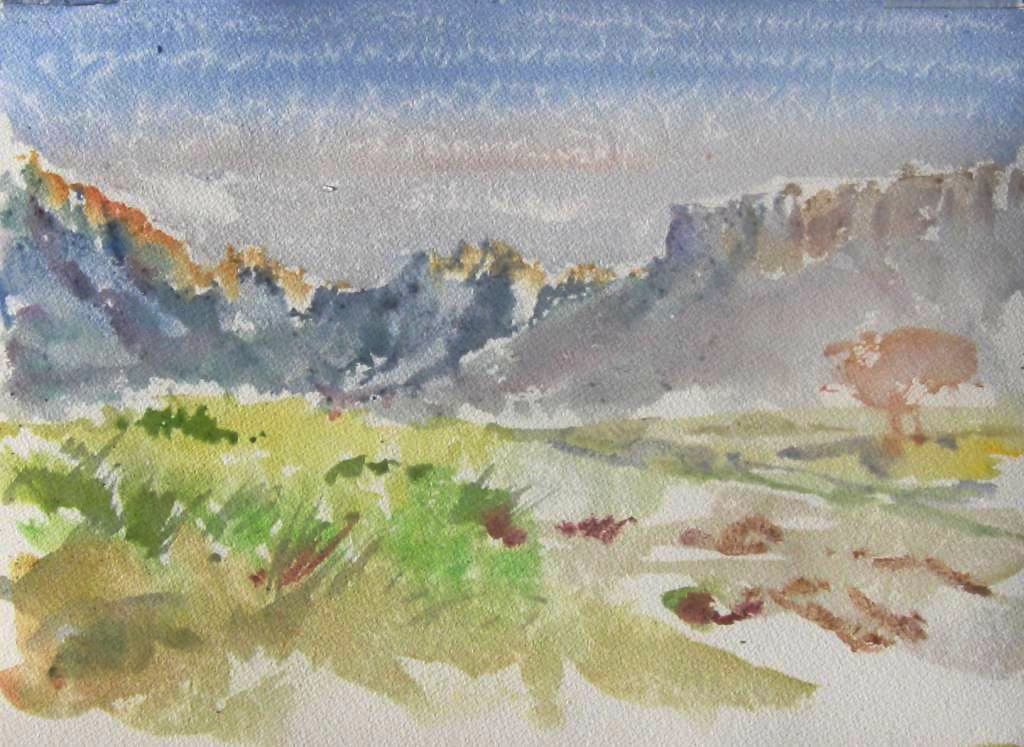 When I got home I painted this view in the studio: 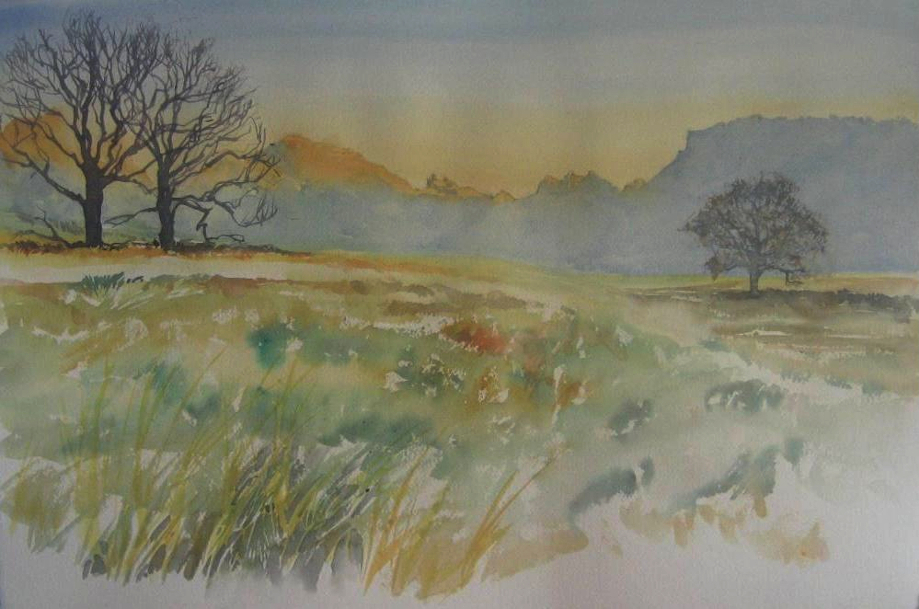 In the original posting I wrote:

I have other work I did which I will put up tomorrow all going to plan.  I have the family cold and right now I am going to have a hot bath and get into bed.

(2021 edit):  I am not sure if I ever wrote a follow-up piece.  I could not find anything in the posts I brought across from my old blog.  But here is a comment on the paintings I have from that trip:

I headed up the kloof fairly early and crossed the shale-band at about midday.  I stopped to paint this painting of the shale-band disappearing round the slopes to the West: 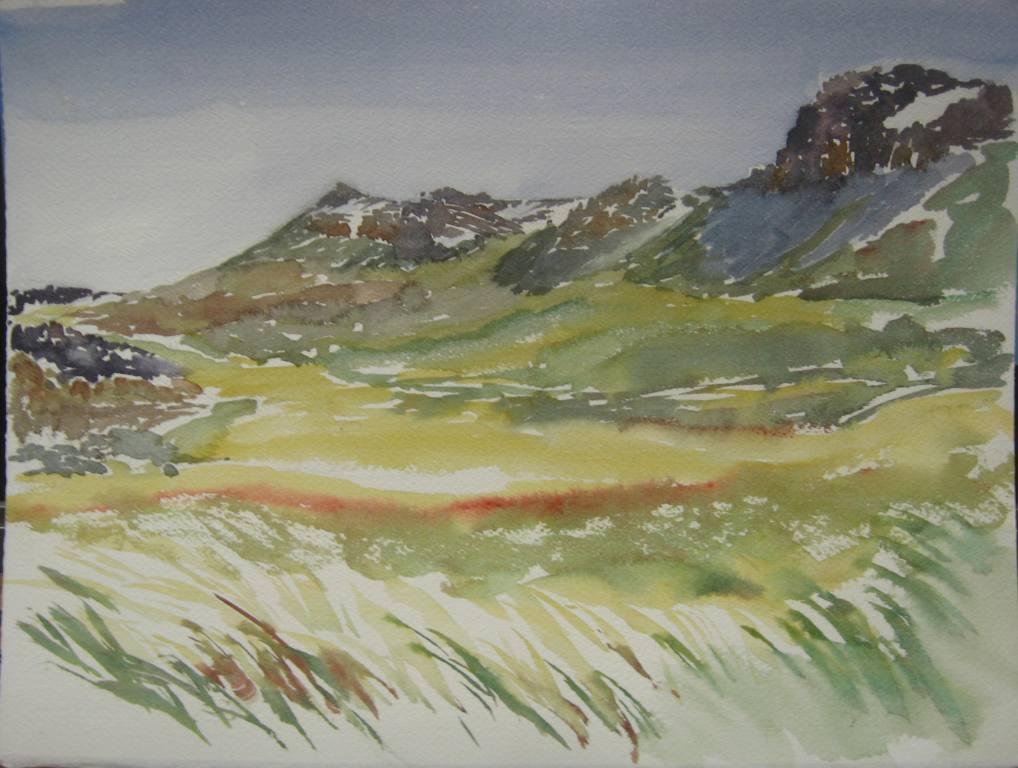 I walked up the first slope and did this painting of Tafelberg and The Spout.  Guess which is which.  heh heh: 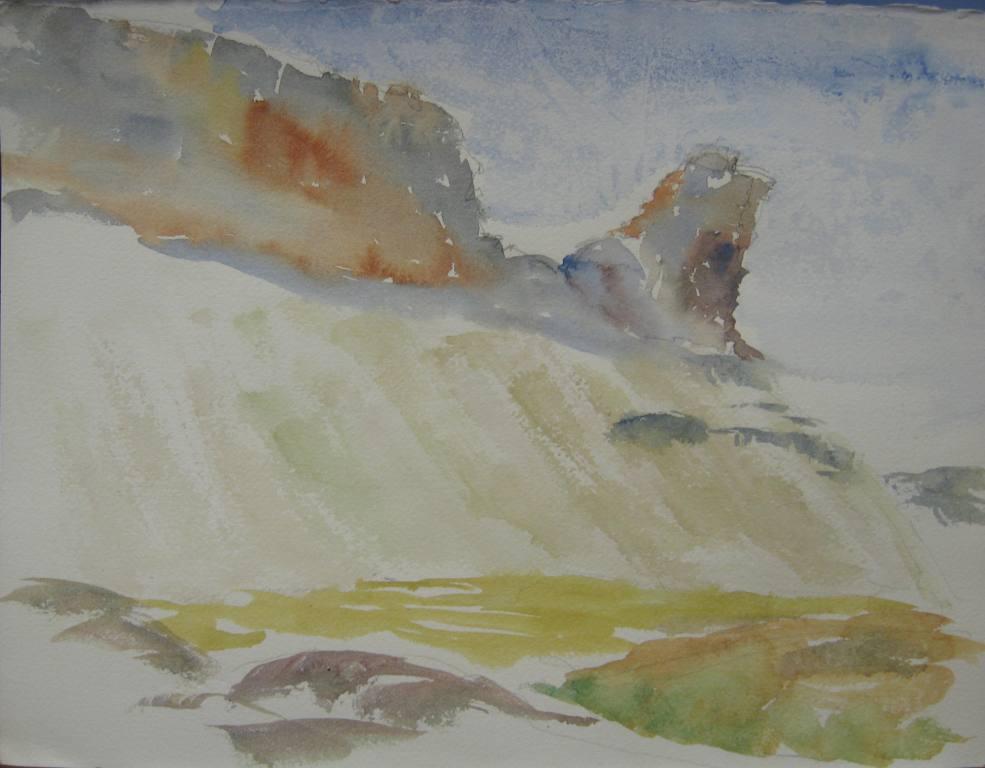 There was a field of snow on the slope.   I had an orange and packed my kit to walk.

I got up to Spout Cave in the later afternoon.  Fortunately there were no other hikers there.  I was feeling burnt out from a heavy load of workshops I had been facilitating.  So I set up a sleeping spot and made a meal on my stofie.  Later I crossed the ravine and took a photo of the cave with my gas lamp burning.  Then as the light faded I crawled into my sack and lay listening to the quiet and the icicles breaking off the cliffs of Tafelberg.  I used my photos to paint this view of the cave: 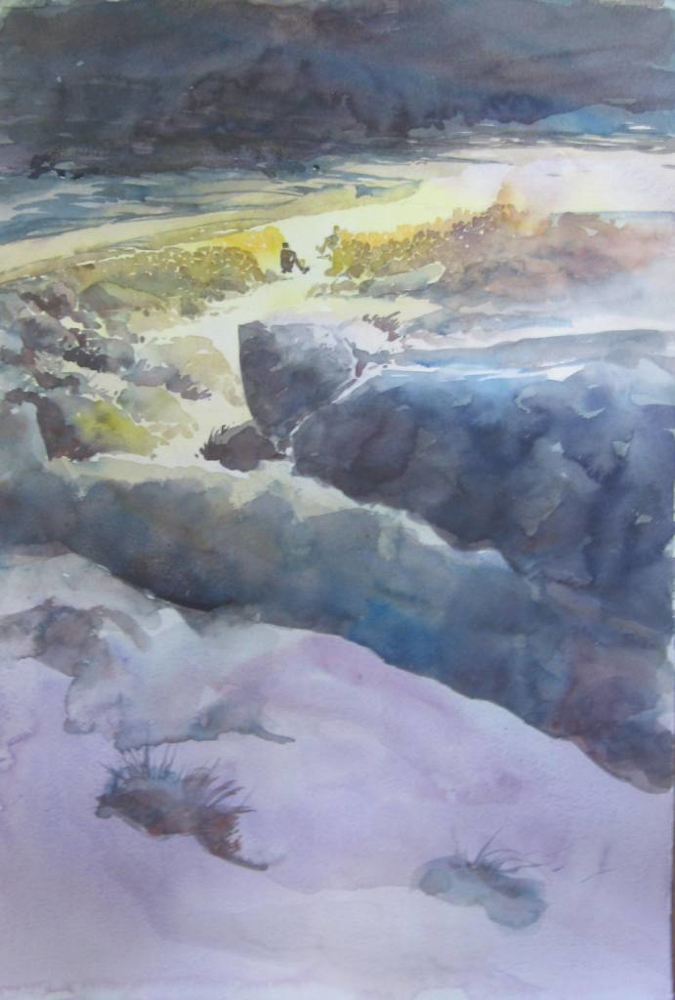 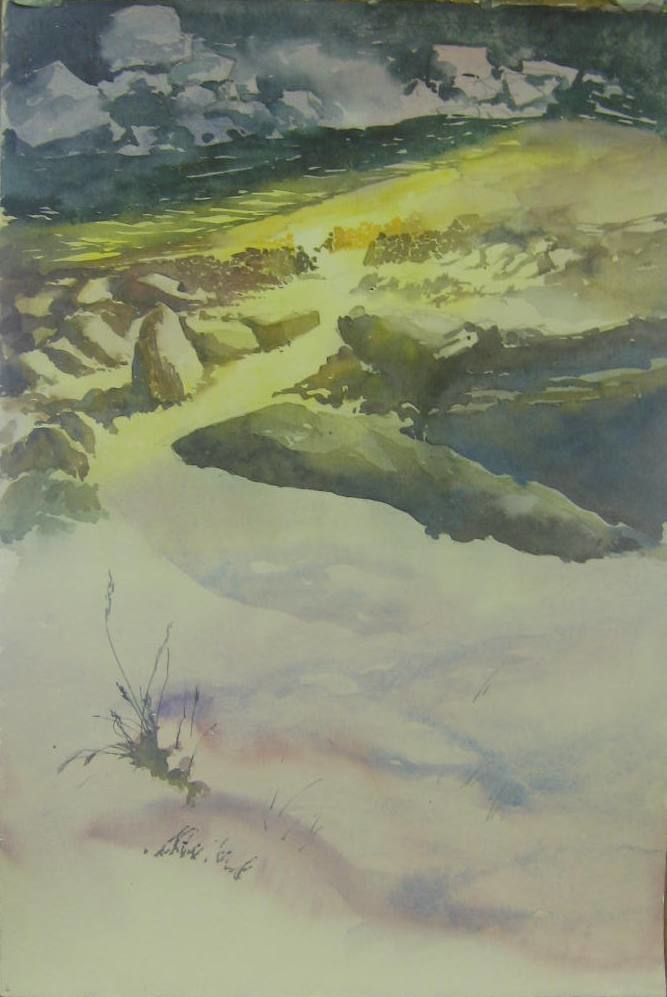 I remember having a wonderful sleep, hearing the wind blowing outside the cave.

I got up in the morning, sat in my sack and made some tea: 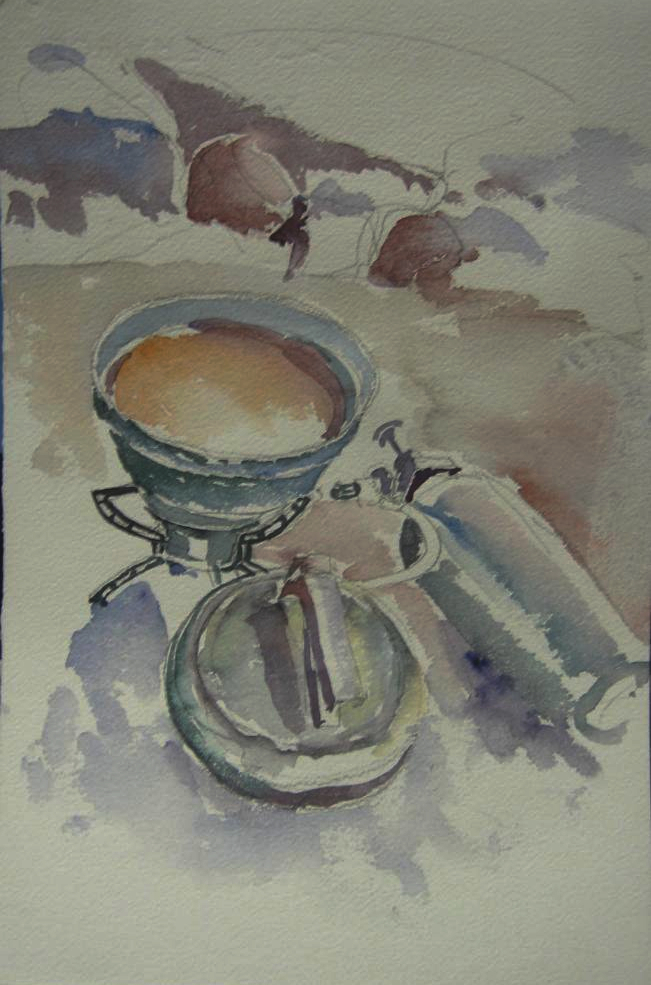 Then I painted these watercolours of the view to the West from the cave: 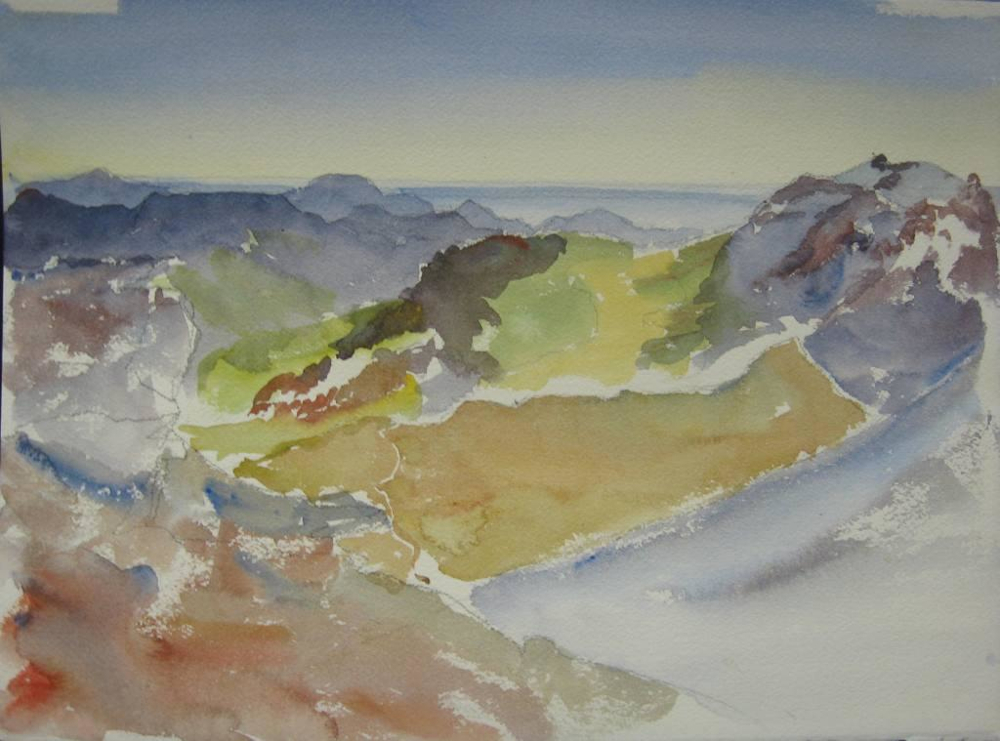 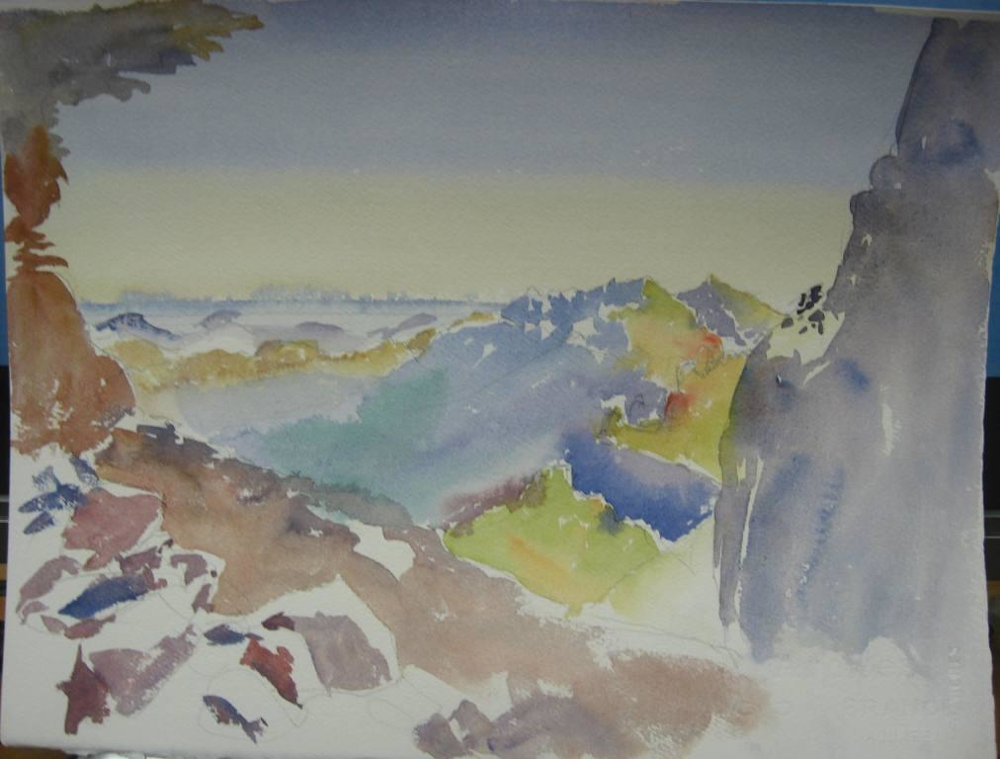 Later I took a look at the view to the East at the top of the kloof just above the cave.  Except I made the mistake of going out in my (pink) crocs.  Crocs are the worst for walking in snow!  But I took a few photos and did this watercolour in the studio when I got home: 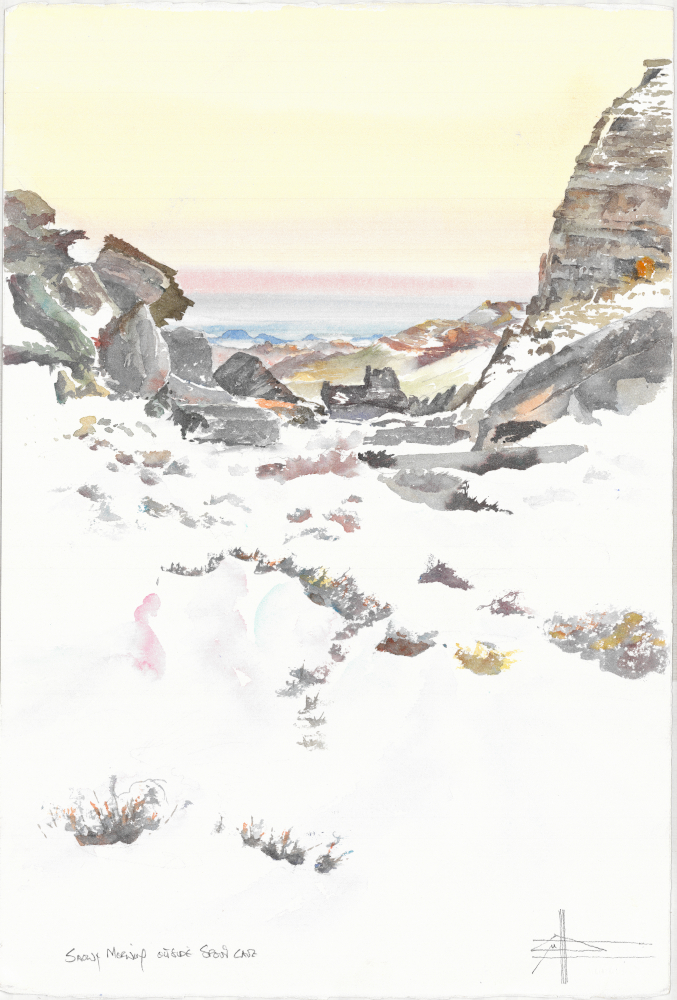 I packed up and headed down the valley again.

When I got back to my car in the late afternoon I saw the baboons had been there.  They had broken the antenna off my roof and had left a pile of poo instead.  Baboons!

On the way home the low level bridge over the Olifants River waas still under water but a local farmer came over in his bakkie. 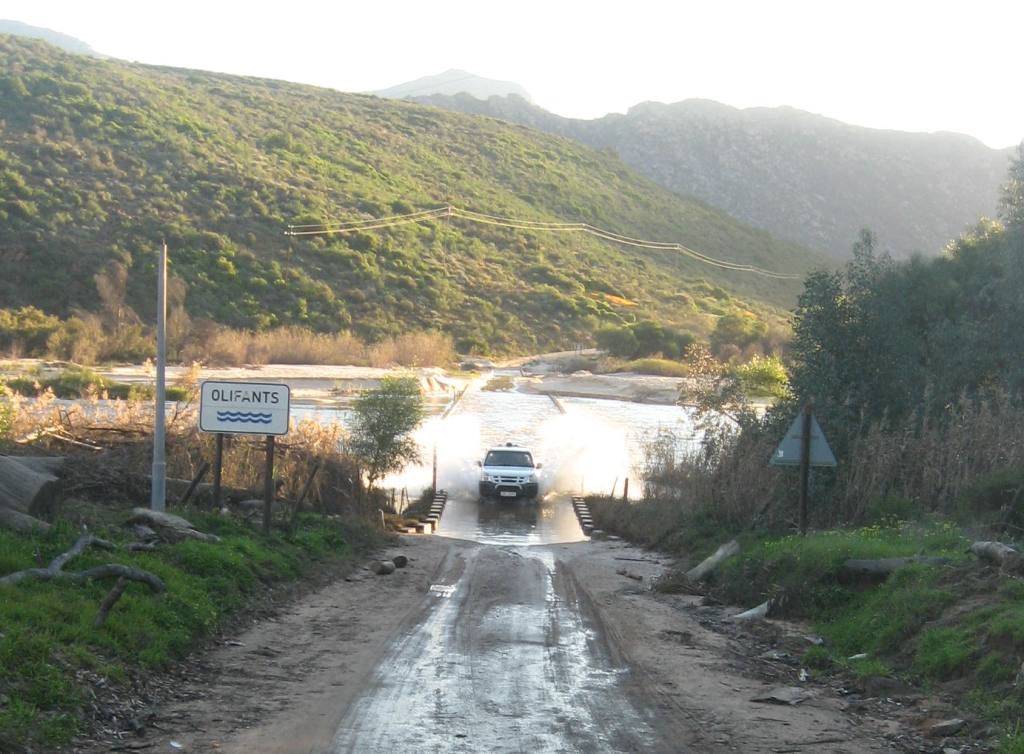 I chatted with him and he said I should make it over in my Uno. 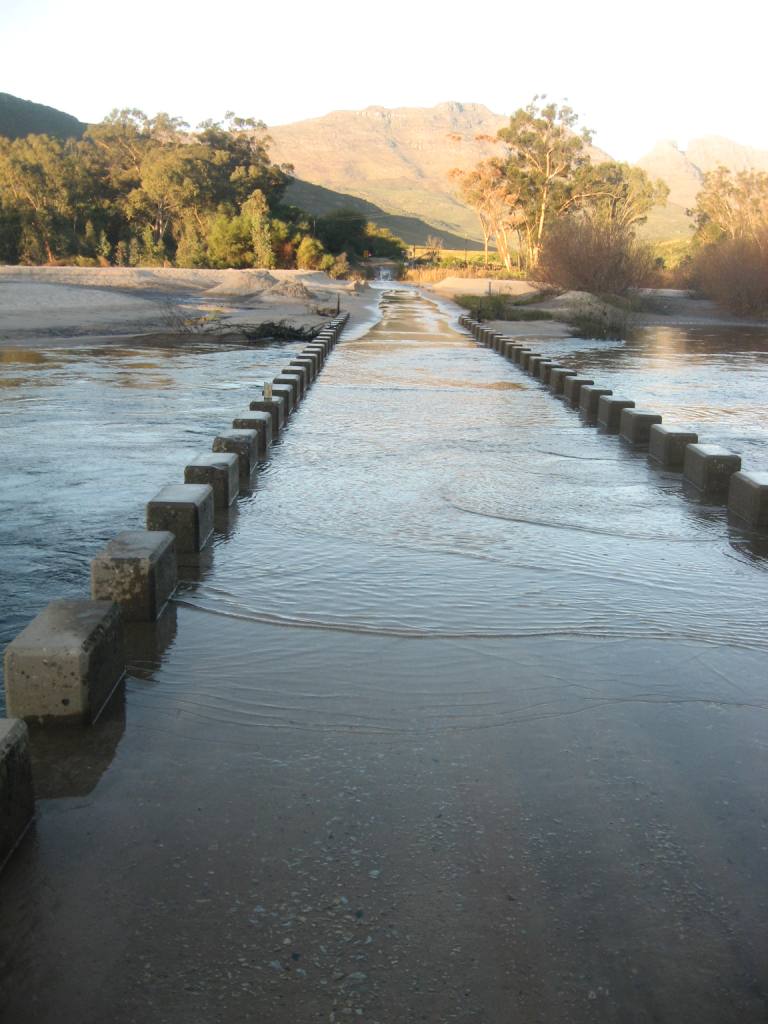